…the problem with taking the Bible seriously…

There is an old story, basically a fable, about a scorpion and a frog that opens a door for me to better understand what it looks like to take the Bible seriously. The fable basically goes like this:

A frog looks across a river to the far side of the valley he lives in, and the far side is lush and green and inviting. With resources on his side of the river dried up, he decides to swim across. A scorpion sits at the bank of the river as well, gazing across at the lush land on the other side. As the frog is about to set out across the water the scorpion stops him with a curious request, “May I ride across the river on your back?”

“But I can’t get across the river myself, I can’t swim,” the scorpion protested.

“Not my problem,” said the frog.

“Listen,” the scorpion began to explain, “if I were to sting you while we were traveling across the river you would die, there’s no doubt about that. But I would also die because I can’t swim. So, you see, there’s no sense or logical reason to be worried. I don’t want to kill myself and that means you’re safe.”

The frog pondered this for a moment, couldn’t deny the logic of the scorpion’s point, and invited him onto his back. They set out across the river a truly curious sight to anyone who might have glanced their way.

Half way through the journey the frog felt a sudden, sharp sting on his back and he cried out, “did you sting me?”

“I’m afraid I did,” the scorpion sighed.

“But why, now we’ll both die! Why would you sting me if you knew you wouldn’t make it across the river?”

“Well,” said the scorpion just as they were both sinking beneath the surface of the water, “I’m a scorpion. Being on your back didn’t change who I am.”

And they both floated lifelessly to the bottom of the river.

Sure, that is a dark fable. And you would be justified in wondering how this helps me understand the Bible and take it seriously. 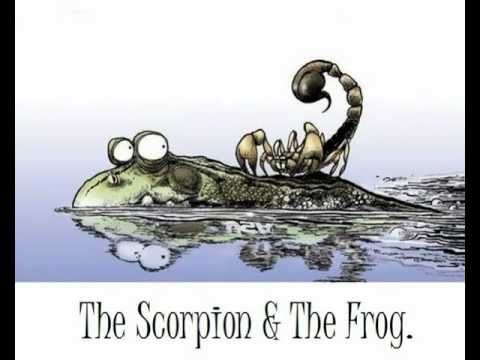 But I’m not actually being all that creative, and certainly not sacrilegious, when I refer to the Bible as the flesh-piercing scorpion. The book of Hebrews refers to the word of God as a “two-edged sword,” which is far more violent than a scorpion’s stinger. What that word picture of a sword, and the metaphor of a scorpion, point us to is not necessarily complicated. But without doubt it is harder to accept than most of us want to hear.

The truth of God brings peace, comfort and sustains us through the most difficult, and most amazing, seasons of life. But it only does so when we allow it to do some very sensitive work in us. The truth of God, to be effective in our lives, must often replace the “truths” we have spent much of our life establishing through our own wisdom and experience. So there is very little peace,  comfort and support when we attempt to simultaneously hold to what the Bible says along with whatever it is we would prefer to be true. This does not mean that the Bible gives us specific instructions about every aspect of life. If you believe that, then you probably haven’t actually read the Bible. The Scriptures reveal God to us, they do not reveal divinely ordained parking spaces or choose our morning cereal or even lay out exactly what job/career we should pursue. The best way to understand day-by-day direction is to recognize that the Bible introduces us to God, then in relationship with God we are led by His Spirit, who is with us always. So it’s not that the Bible isn’t involved. It is, by and large, involved in a slightly more organic way than we sometimes assume.

But, to be sure, there are some things that the Bible specifically tells us. And it is those things which  become the swords and scorpions. “Love you neighbor,” and, “pray for those who persecute you,” and, “be anxious for nothing,” and, “pray in this way,” and dozens of other direct instructions are contained in the New Testament. These words of Jesus, Paul, John, Luke and others often assault our sensibilities.

Like the frog we hear the offer the Bible makes, “let me come with you and we will set out toward a better life,” and assume that offer means that the truth of God will conform to our situation and our context because we seem to have been going the same direction all along. But the reality is this: the truth of God cannot help but displace our old truths, that is its very identity. It seems reasonable that we could make it to the “other side” of our obstacles unscathed, but the deeper truth of God is that He isn’t interested in being carried around as an addition to the lives we’ve already established. Though that might work for a little while, or through a few seasons of early growth and immaturity, eventually things will get more serious.

Like two soldiers side-by-side on the front lines of battle, or like a mother with her newborn baby, God looks to establish His relationship with us in a much more traumatic and binding way than most of us expect. He is not hoping we all join up for a ride together across the stream. He looks at us and tells us it is time to die. And not only that, but He says, incredibly, I am dying too…with you…for you. So that we might be raised together, to live forever.

The good news that we call “Gospel” is not a story about God taking us where we’ve always dreamed of going – the lush and inviting “other side” of the river. It is a story with a twist. That plot twist is this: the life we were created for is not on the other side of the river but in the murky, mysterious depths below us. It is found in the adventure and peril of living a life without visible borders, where deep calls to deep and sea monsters are the pets of the King who has called us into His scary and addictive Kingdom. The Bible’s truth, its commands as well as its narrative trajectories, might seem tame and manageable at first, but the living, fire-breathing Word of the One who created us and the world will eventually and inevitably seek to detonate its charge of grace, mercy and love inside of our skin and soul, creating something new, something remarkably more expansive and more consuming than the “rules and stories” we thought we were reading.

So, while this might seem odd, I encourage you let the scorpion climb onto your back. Let it ride with you as you pursue your desires. But don’t be surprised if the potency of the Word of God doesn’t reroute you; not to another shore but into the most unexpected and inspiring and satisfying and nerve-wracking places you could ever imagine. It’s not a boring kingdom the Scriptures invite us into. It’s one of infinite wonder and unmatched beauty.

Taking the Bible seriously doesn’t mean splitting hairs over pronouns and verb tenses. It means letting it determine the direction of your life, no matter where that takes you. Just as Jesus told His disciples, “follow Me,” the Scriptures, and the liquid-fire of the Spirit that moves through them, asks, “let Me show you a better place than the shores you’ve been pursuing.”