…could you forgive the sniper who shot your daughter…

In a story that emerged from the war in Bosnia, a father was forced to rush his three-year-old daughter to receive emergency medical care after she was shot by a sniper. After he’d passed his little girl to the physicians the father broke down and began to weep. Camera crews, at the hospital already, captured this scene as the father, instead of hurling curses and words of hate at the unknown assailant, expressed a desire to sit down with the shooter over coffee and ask him why he would do what he did. This stunning appeal to the humanity of a person who had carried out such an inhuman atrocity caused people to stop for moment, to recognize that something different from the typical rhetoric and response was taking place.1

I am also the father of a little girl, and I find this to be a remarkable response, one that I can only hope I would have the grace to offer in the stress which a moment like that inimitably presents. But as I read this account, and the author’s subsequent words about the power of embracing a forgiving spirit, I was saddened as I thought through the likely reactions of so many people that I know and love. Not only do I believe that many people’s reaction to the shooter would have been more grounded in retributive justice – which is certainly understandable – but that many would be disgusted by this father’s incredibly gracious reaction seeing him as weak or misguided. In our world it doesn’t seem to be enough to simply want vengeance, it is looked down upon to want to forgive. 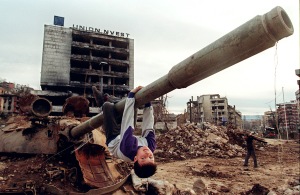 In my opinion, it is only forgiveness, it is only by breaking the cycle of violence that we will ever find actual change. I do not say this as a crazy-eyed,  anti-war protester, and not even as a conscientious objector, but I say this a Christian. It is my Christian faith that teaches me that it was not an act of vengeance that saved the world, but an act of sacrifice, carried out on a Roman cross, by a completely innocent Man that neutralized the eternal power of death. There is a need for armies to fight when injustice is running rampant, but as followers of Jesus Christ there is also a responsibility for us as individuals to fight against allowing hatred and unforgiveness to fester in our hearts.

Miroslav Volf, the author of the piece I was reading, went on to say this,

If the rifle butt in the back of the victim creates inhumanity, then hope cannot lie in a rifle butt in the back of the perpetrator; for this would only ensure the triumph of inhumanity – a sense of justice, compassion, and forgiveness will have given way to the rage of revenge and hatred. The hope for the Bosnias of our world lies instead with men and women who are determined to fight evil every step of the way while refusing to let the rifle butt do its work on their souls once it is finished doing its work on their bodies.

This is also true in our daily relationships. The Bible says that a kind word turns away wrath, and that is precisely what forgiveness in action is: it is a kind word where an unkind one could be justified. How are we responding to our spouse, our kids, our friends, and even our enemies? Are we diffusing the potential anger and vengeful attitudes by

absorbing their frustrations and returning grace to them, or are we simply volleying bombs of ungrace back and forth? If the latter is true then we will find that there is no end to our skirmishes, no cessation of our battles, and we will never stop either wounding others or being wounded ourselves.

1. Miroslav Volf, Against the Tide, “A Cup of Coffee”