…there shouldn’t have to be a gun to your head…

Flannery O’Connor wrote stories, but she wrote them in a way that subtly revealed more than just interesting plots and memorable characters. She had a gift for seeing life, culture and people below the surface, and then relaying those insights through her stories. While this is particularly true of Southern culture, her profound grasp of people was nearly universal.

After creating a self-serving, outwardly proper Southern grandmother, who possessed a remarkable mastery of polite manipulation, in the story “A Good Man is Hard to Find,” O’Connor puts that woman into a harrowing situation with an escaped convict. This Southern lady does all that she can to drip sweet with optimism and compliments to this prison-hardened young man, and all, obviously, to save her own skin. It becomes a darkly humorous experience to read the woman’s attempts at convincing this self-professed sinner that he is actually a saint with a bright future, hoping that her flattery will endear her to him enough to help her avoid getting shot.

At the end of the story, the convict is interacting with his accomplices:

“She was a talker wasn’t she?” Bobby Lee said…

“She would have been a good woman,” The Misfit said, “if it had been somebody there to shoot her every minute of her life.”

– Flannery O’Connor, “A Good Man is Hard to Find”

It is amazing how motivated we can be to live a life of ethics or morality or, for Christians, Christlike holiness when we have the potential for chaos and collapse hanging over our head. Fear is a powerful short-term motivator. But as I reflected on O’Connor’s story I couldn’t help but think that there was no real change in the old woman’s life, just a reckless attempt at saving herself. The Misfit’s understanding of her behavior was not wrong, but it also wasn’t right. She would have been a “great” person, a model human being, a picture of grace and solidarity if only she could have lived her life with some fear of what might happen to her if she faltered. That is until she could convince herself that being who she actually was inside was more important that being safe, or alive. 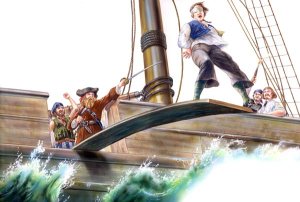 We don’t actually change through fear. We can be motivated to behave differently, or, in the best scenario, fear can initiate a turning in our lives that leads to authentic life change. But we can’t be scared straight, we can only be scared into performing a role in our outer life that is not actually consistent with our inner life.

Real change, the kind of change that takes longer to be seen but lasts a lifetime, only comes from motivating forces like unearned grace, unconditional love and undeserved mercy. We are changed in our souls, in the deepest places, by these things and not by fear. And this is precisely why the cross of Jesus Christ will always generate the kind of life change that baffles the world. It is because God Himself gave His Son’s life long before anyone was worthy of that sort of love-act, that new life takes place. And, ironically, in doing this, God opened His arms wide to welcome anyone who would come to Him so they could be transformed into the kind of people who were deserving of His total acceptance. This is the mystery of the Gospel.

Our fear of a tortured afterlife might be enough to make us think that we don’t want to go there, that we need to make sure we don’t act like people who seem to deserve that sort of destination. But this is like asking someone to tell you how handsome or pretty you are while you’re holding a gun to their head; what they tell you might sound good, but it also probably isn’t the truth. Our chief motivation for living a righteous life isn’t about avoiding a hell, it is about embracing fully the work and love of Jesus Christ which preceded our salvation.

As Christians it shouldn’t take the threat of death to make us live as God has told us to live, it should only take us looking at the real death of God, who died in our place because of His great love for each of us.

The fear of death follows from the fear of life. A man who lives fully is prepared to die at any time.