…you don’t have to wait…

In what is arguably the most famous story from the Gospel of John, Jesus’ raising of his friend Lazarus from the dead, there is an important revelation into what we mean when we  talk about eternal life using expressions like “the Christian life”, or “a life lived in Christ”, or “a life of faith”.

As Jesus comforts Martha, Lazarus’ sister, He asks her if she believes that she will see her brother again. She replies that she will, in the resurrection. There was heated debate in the 1st Century among Jews as to the nature of the idea of “eternal life”. You see this in the Gospels and in Acts when there is passionate debate and division between the Pharisees, who believed in resurrection from the dead, and the Sadducees, who did not believe in a life after death. Even for the Pharisees this idea represented a relatively new understanding of things. So Martha was lining up with this young idea of life after death, though the essence of that idea was really found in one large-scale resurrection event when everyone would be raised, not something that could happen to individuals immediately after they died. Jesus, hearing Martha’s faith, offers her a new understanding of what He knew to be true about life and death,

Jesus then proceeds to go to the tomb where Lazarus has been for four days, tell some people to move the stone that is covering the access hole, and by the power of His spoken word, calls the dead man back to life. This is a big deal, but perhaps even more so than even this crowd understood.

In the prologue of his Gospel, John writes these words about Jesus,

All things were made through him, and without him was not any thing made that was made. In him was life, and the life was the light of men.

What becomes critical to see, if we are going to understand just what John is trying to tell us by relaying the story of Lazarus, is that Jesus is not just the Giver of life after death (“I am the resurrection…”), but He is the in-the-beginning Giver of life before there ever was death (“I am…the life”). When Jesus calls Lazarus out of the tomb He is doing so in a way that proves He is “the resurrection”, but what do we do with the second half of Jesus’ “I am” statement, that He is “the life”?

What seems to make sense to me is this: Jesus’ plans for your life didn’t begin with your salvation, and they aren’t scheduled to begin at the “end of time”. God made you, crafted you, formed you in your mother with gifts, abilities, preferences, passions, and purpose. He didn’t wait to make you beautiful when you finally walked an aisle in a church service, or humbly knelt down in a bathroom stall at work, or called out in tears to Him for help in your living room – no, God created you in a very intentional way. Jesus gave you “life” AND “new life”. He didn’t just stumble across you when you started praying and say, “who in the world is this? I’ll have to see what they can do and then give them direction.” No, Paul says in Ephesians that before the foundations of the world were set in place God knew you, loved you, and had already sent a call to your heart that would echo and reverberate throughout time until you were able to hear it. 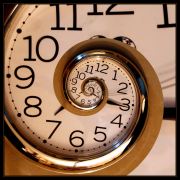 What does this mean? At the very least it means that if you are waiting for the end of time or even some great spiritual explosion to take place so you’ll know what to do for God then you have misunderstood what the Bible has to say about eternal life. Eternal life began before God dreamed you up, then when He redeemed you He set you into the flow of time that had been waiting for you all along. The things that you are good at or interested in, even if they compelled you before you met Jesus, are not to be cast aside for “new” pursuits. To the contrary, I believe that God made you the way you are so He could use you in that way. Granted we all find that our motivations and passions need to be redirected so they have redemptive ends, but they do not have to be re-created. Jesus was the Giver of life before, and He is the Giver of new life now…same God, same goals, same kingdom purpose.

I believe that if Lazarus’ resurrection by Jesus means anything to us today, it is that Eternal Life begins now, not later. And the question then is this: how do we live an “eternal life”? For one thing, don’t try become someone else hoping that God has a place for that future version of you in His kingdom. Remember Paul’s words again; God knew you before He made the world, He made this place with you in mind knowing how it would need to be set up so you could be effective within it. An author that I have grown quite fond of over the last few years is Frederick Buechner, one of his more quoted lines gets at what I am saying and calls us to look at who it is that God has made us to be, and re-made us to be:

“Vocation is the place where our deep gladness meets the world’s deep need.”