Fear and Trembling by Søren Kierkegaard

This is the first book I’ve read by Soren Kierkegaard, though I’ve had some limited exposure to him through quotes, excerpts, and cross references. Though I do enjoy philosophy I am more interested in his philosophy from a theological angle so I started here as opposed to some of his other, more popular, works.

This was not the easiest thing I’ve read this year, but it was rewarding. Kierkegaard in this work is essentially trying to root down into the essence of faith. He does this by taking the story of Abraham taking Isaac to Mt Moriah to sacrifice him, and compare / contrast Abraham with other “heroes”. He builds the characters of the comic and tragic heroes in literature to hold up as foils to highlight the unique nature of Abraham (Kierkegaard’s “knight of faith”) in this sacrificial scene. He also leans heavily into the difference between the aesthetic and ethical forces that serve as motivations for us all as we attempt to choose our courses in life.

“Abraham is therefore at no instant a tragic hero but something quite different, either a murderer or a believer.”

I will not pretend that everything Kierkegaard said is immediately clear to me, but the significant ideas were communicated well. He does a great job of using and altering ancient tales and characters in order to illustrate some of the more dense philosophical ideas he presents. 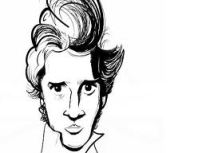 If there is a “layman’s takeaway” for me from “Fear and Trembling” it is the way Kierkegaard relentlessly lauds faith as a completely different thing than honor, valor, sacrifice, goodness, etc… He stands faith on a mountain and allows other motivating factors and other passions to attempt to take the pinnacle but none succeed. I’ve never encountered the idea of faith presented with quite so much reverence, and this is something that really only became clear in reflection on the book not in the reading of it. The importance of faith in the individual’s relationship with God is expressed beautifully here,

It is not a long work so it is manageable and accessible for those who might not find philosophy to be very engaging. And there are sections that create head-scratching and require discipline, but almost every narrow passage way that Kierkegaard walks the reader down opens into a broad place of understanding and value.

“But what every man has not a right to do, is to make others believe that faith is something lowly, or that is is an easy thing, whereas it is the greatest and the hardest.”

View all my reviews