…there’s a little room left in the middle…

Though I rarely allow myself to talk politics, it’s difficult to avoid the circus of government that we endure. As if the grandstanding and half-truths of the majority of political characters wasn’t enough, we have the distinct privilege in this historical moment of getting multiple television stations, radio stations, online magazines, and an army of blogs sending barrage after barrage of slants and spins into our living rooms, inboxes and social walls.

The tone and tenor of our current civic climate, in large part, is distinctly polarized. You are either on one side or the other. Left or Right. Here or There. This side of the aisle or that side of the aisle. Which is disheartening, because the truth rarely resides in exclusivity on either side of opinion.

For this reasons I don’t know if I was comforted by his company, or if I simply felt a great deal of compassion toward Nicodemus as I was reading the end of John 7.

Earlier in John’s Gospel, Nic had chosen to act on a nagging feeling in his gut and he met with Jesus. But he met with the Rabbi at night, so he wouldn’t be seen by his more conservative counterparts. The majority of the religious professionals had aligned themselves opposite Jesus for many reasons. But Nicodemus was intrigued enough to give Him a listen, to ask his questions, to seek a filling of the hunger in his soul.

That night, as chronicled in John 3, something happened and it seems that by morning Nic wasn’t the same. A fact that is suggested and reinforced in John 7. Here, Jesus had been engaging in a lively dialogue with the crowds attending the Jewish Feast of Booths, and the Pharisee party had intention of arresting Jesus; a decision which went south when the soldiers charged with taking the Teacher into custody were more enamored with His teaching than their own orders (John 7:45-46).

As the Pharisees castigated these officers, Nicodemus allowed his heart to get in front of his brain:

Nicodemus, who had gone to Him before, and who was one of them, said to them, “Does our law judge a man without first giving Him a hearing and learning what he does?” 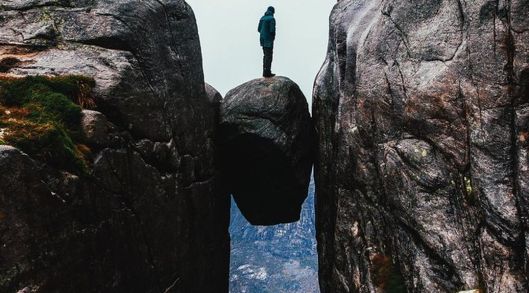 His angry colleagues clap back at him quickly: “Are you from Galilee too?” (John 7:52). This was meant as an insult. They took Jesus to have been from Galilee (which was an assumption based on partial information…and also wrong), and apparently their best verbal barb was to sarcastically growl the question, “are you from the same place this Jesus is from?”

It dawned on me that Nicodemus might have had an answer. And though I would have probably muttered it under my breath, it isn’t difficult for me to hear Nicodemus whisper to himself, “maybe I am from where He’s from…” If a Pharisee asked me if I was from the same place as Jesus, I would like to believe that I’d have enough edge to say, “yeah, what if I am.”

This works because in John 3 Jesus actually told Nicodemus that what he was seeking was not just information, but a new identity emerging from a renewed point of origination. That new identity would come when Nic was born again – not born like he was the first time, but born of the spirit (an idea which the frightened Pharisee struggled to understand). And wasn’t it the Spirit that had hovered over Mary when Jesus was conceived in her womb three decades before Nicodemus met Him under the cover of darkness? Was Jesus really inviting Nicodemus to be born in a similar process to the one that had produced the Incarnation?

Maybe so. After all, Jesus Himself said that the Spirit blows where it wishes, it’s hard to tell where it comes from or where it’s going…but out of the wildness of that Divine Wind people are “born of the Spirit” (John 3:8).

Maybe it’s not such an insult after all to have someone accuse us of coming from the same place as Jesus. In fact, that might be one of the greatest compliments we could receive. But we must be careful, because those born of the Spirit frequently find themselves unable to stomach the partisan politics of this world and its empires. Those conceived and born by the Wind of God often find themselves in the middle, between the battle lines that have been drawn by those who care more for half-cocked conclusions than heart-soaked compassion.

Don’t be afraid to love people on both sides of the aisle. And don’t fear the insults of those who are quicker to adopt a cause than ask a question. Fear not in those moments because if you look around you will probably find that you are not standing as alone as you thought you were. In fact, you might find that you are standing with Jesus Himself, in the middle of a moment where a sacred Breeze is kicking up. For while you and I might be uncomfortable claiming affiliation with one group over another, that certainly doesn’t exempt us from finding ourselves in alignment with the heart of the Father.