…right, or more right – the depth of pentecost…

In the book of Acts, the meeting between Paul’s friends, Priscilla and Aquila, and the Ephesian evangelist Apollos, unearths a unique perspective on truth for anyone who aligns with the pentecostal movement. Apollos had dwelled and meditated on the life of Jesus to the extent that he had grasped the reality of Christ in a profound and meaningful way (and this, perhaps, without having been taught by the Jerusalem contingent of Christ followers). Luke, in Acts 18, writes:

[Apollos] had been instructed in the way of the Lord. And being fervent in spirit, he spoke and taught accurately the things concerning Jesus, though he knew only of the baptism of John. He began to speak boldly in the synagogue, but when Priscilla and Aquila heard him, they took him aside and explained to him the way of God more accurately.

Apollos was a fire brand that God was using to proclaim the hope and beauty that Jesus had accomplished in Himself and in His work. But the text seems to indicate that his view of things was still limited. This is a curious thing to say because Priscilla and Aquila didn’t actually have to correct Apollos’ theology or doctrine, their contribution was something else. That particular “something else” is less important for this post than the fact that there was a “something else” to be found at all.

The language Luke uses is notable. He says that the categories of understanding were not “right” and “wrong,” instead they were, “accurate” and “more accurate.” So it wasn’t that Apollos was wrong, it’s that he had yet to be as right as he could. And if you eliminate the idea of doctrinal accuracy or theological structure (and this seems to be Luke’s point all along by saying that Apollos’ teaching was being presented “accurately”), you are left wondering what could be “more right” than “right”?

The difference that is seen in the life which has been engulfed by the presence of the Holy Spirit has much less to do with controversial ideas of speaking in tongues and prophecy, and much more to do with the sudden emergence of clarity that the Spirit brings to the baptized. The unique comparison between the disciples after the Resurrection and the disciples after their experience in the Upper Room (Acts 2) is not so much theological as it is social. The disciples who had seen the risen Lord and yet still stayed locked up in a windowless room (John 20.26) had become the disciples who were compelled to stumble out of the upper room, tipsy and light-headed like they’d been breathing the air from a distillery, to compel thousands of mockers to look upon the love of God in Jesus Christ on the cross. That’s a significant change no matter which side of the equation you’re on. 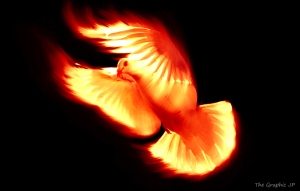 At the risk of being accused of watering-down the meaning of Pentecost, I can’t help but believe that the most noticeable change in the disciples after the “rushing mighty Wind” was not to clarify a doctrinal understanding of speaking in tongues. Instead, suddenly doctrine had a purpose, theology had an expression, and that expression was to fill the Jerusalem air with words and ideas that made much of the love of God and the work of Jesus for the sake of those who had yet to be engulfed in the blaze of the Spirit of God. The disciples knew that Jesus had died and risen long before they found themselves wobbling through the streets of Israel declaring it. They had accurate information, and they could answer the question of Jesus in the “right” way. But after the baptism of the Spirit they had a different kind of accuracy, they were a different kind of “right;” there was a depth to their accuracy that moved them into the middle of the culture, into the chaos of the world out of the warmth and safety of the collection of upper rooms that they’d been in since the crucifixion.

Apollos wasn’t wrong, but his “right” had yet to plumb the depths of love and grace as they were concerned with people. Priscilla and Aquila had found in this man a fast friend, they were almost immediately taken with him and his passion, but they understood that life is about more than just being right. There are depths to life, a spirit of things, that cannot be adequately represented by explanations or creeds. There is a chasmic difference in saying that you love your spouse or child and holding them when they are hurting, or laughing with them when they tell you about their day; to say you love them is accurate, to show them your love is more accurate. And there is a “more accurate” way to follow the life and example of Jesus than parsing His every word and calling it a day. That “more accurate” way is to walk exactly the way that Jesus walked: touching, healing, feeding, embracing, and blessing people.

Life led and consumed by the Spirit of God is deeply concerned with people, with nearness, with bringing life and vitality into places where there is death and stagnancy. This kind of life is passionately concerned with being right, but it is not satisfied with the kind of “right” that is able to exist disconnected from real life and real people. To read the Gospels, the account of Jesus’ Spirit-empowered ministry, is to be struck by the difference in knowing that Jesus has been raised from the dead compared to having that very Spirit that raised Him flooding your own soul.