…your enemy deserves your honor… 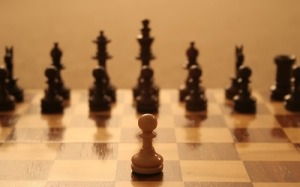 Read this phrase slowly: “your enemy deserves your honor.” I would suggest you read it again, maybe a bit slower this time. I am almost certain that most of us will be quickly frustrated by this idea, but I believe that there is a truth in it.

“Praise the enemy,” did he really say that? Of course he did. Chesterton uses the image of an army scout, whose sole purpose was to secretly gather intelligence about the opposing forces, to teach us a lesson. A scout would be a complete failure if, after having spied on a nearby regiment, he reported to his own captain that the opposition was weak when that wasn’t actually the case. We could sympathetically say that this scout was trying to be optimistic, or inspirational or even that he was trying to be loyal to his fellow soldiers by giving the enemy no credit. But in misrepresenting the opposing army this scout was actually just acting like a fool.

We can become so addicted to our own positions that we refuse to acknowledge the “rightness” of anyone who would ever disagree with us. And in doing so we will have become fools just like the “loyal” scout. Affirming our own ideologies over someone else’s, no matter what facts or logic is presented, is not faithful, loyal or helpful it is foolishness.

When our enemies are strong or right we gain nothing by acting as if they are wrong or weak.

Without knowing, and acknowledging, where we are outnumbered, outgunned or out-strategized we will find that we saunter into battle unprepared, underprepared and easily undone by our foes. This does not happen because we hate our enemy too little. This happens because we love our own way of being “right” more than we love the truth.

In a spiritual sense there is much to be considered, but enough for today is this: don’t assume the enemies of your heart are weak or unskilled just because they are evil, for it is only is honoring the craftiness and legitimate strength of the enemy that we are actually prepared for their attacks on our lives. Success is often found in admitting where your enemies are right, not where they are wrong.