…the benefit of predators…

Life can seem unfriendly at times. Uncertainty can rob us of our vibrancy, leaving us lackluster and victims of existence as opposed to 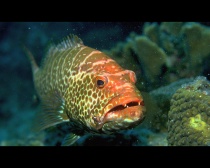 revelers of life. And while pep talks are generally not my thing (my default, which I wrestle with often, is to be more of a contemplative wallower than a spunky fiddler), I read this story yesterday and it has stuck with me. There is a benefit to being hunted, it keeps you alert and exposes either your healthy passion for life or your unhealthy indifference toward it. We need diagnostics that reveal who we are, and frustration and friction do a phenomenal job of it (though, admittedly, it is not the most enjoyable experience in the moment).

I heard about attempts to ship fresh North Atlantic cod from Boston to San Francisco during the nineteenth century. At that time the only way to ship the fish to the West Coast was to sail around the South American continent—a trip that took months. As you can imagine, the first attempts to dress the cod in Boston and pack them in ice failed miserably. By the time they reached California, the fish weren’t exactly fit for consumption.

Next, the cod were placed in holding tanks full of water, shipped to California alive, and dressed there. The results were less than satisfactory. The fish didn’t get much exercise during the trip, and as a result they were pasty and relatively tasteless.

Finally, someone hit upon an interesting idea. “Why don’t we put some catfish in with the cod?”

Why? Because catfish are cods’ natural enemy. Sure enough, when a few catfish were placed in those tanks with them, the cod were always alert and swimming around. This time, when the fish reached San Francisco, they were in perfect shape.

– Bill Myers and David Wimbish, “The Dark Side of the Supernatural”

Friends, God may have you doing what you are doing or near who you are near for the sake of your flavor. It’s not that we enjoy these things, but as Christians we do not see the turbulence in our lives as pointless, wasteful, or most importantly unredeemable.

Keep encouraged when the catfish graze you with their whiskers, for such is the process of making you tasty.

In this you rejoice, though now for a little while, if necessary, you have been grieved by various trials, so that the tested genuineness of your faith—more precious than gold that perishes though it is tested by fire—may be found to result in praise and glory and honor at the revelation of Jesus Christ.