…a woman at every well…

There is no end to the troubles that are caused by the privatization of the Christian faith. By privatization what I refer to is keeping belief and faith in one corner, or compartment, of our lives, at a safe distance from the other activities, roles, and spheres of influence that make up our existence. This seems to be quite popular with politicians (who attend church, or claim a certain religious allegiance, and then promise that they won’t allow their faith to influence their policy decisions) and many in the public eye. I don’t refer to this issue as “trouble” because hypocrisy could damage our culture (it does), or because Christians are supposed to be an example (they are) – these are correct, but they are also talked about quite a bit. I refer to separating our faith from our life as “trouble” because of the personal impact it has on our individual lives.

One of the things that seems to be a pattern for Jesus in John’s Gospel (and in the other three Gospels as well) is His ability to capitalize on a moment. He just seems to be able to say the most compelling things and be in the right places at the right times. Take John 4 as an example. Jesus is going through Samaria and He happens to get tired, hungry and thirsty at the very time when a solitary woman with deep needs was coming to draw water from the well that He just happened to be near, which just happened to have a connection with one of the Old Testament patriarchs. That sounds like an evangelist’s dream scenario. No doubt about this one, Jesus is going to hit it out of the park. Some spiritual metaphor, a little bit of prophecy, throw a Messianic reference in there and suddenly a life is changed forever. That seems to be the way of Jesus; just another day for the Savior. But I would contend that it has very little to do with where and when Jesus arrived as much as it did who He was and how He saw life.

For the sake of this post I’ll put it this way: I believe that Jesus saw a woman at every well.  And I mean that with no regard for specific gender or geography. What I mean to point out is that Jesus never seemed to find Himself in a place or with a person that wasn’t ripe for redemption. And further what I mean is that this had much more to do with Jesus than with the person looking to be restored. I believe this because I happen to strongly believe that we are all looking for these things, and some people seem to have the profound ability to draw that truth out of us.

A quote that has been attributed to GK Chesterton but actually was penned by a Scottish author named Bruce Marshall, gets at my point provocatively:

“the young man who rings the bell at the brothel is unconsciously looking for God.”

There is something built into the heart of humanity that searches and searches for life, for fulfillment, and for love. We all are looking for living water, the biggest difference is where we go to look for it. You could say that the most profound difference between the believer and the non-believer is which well they are drawing life from. There’s a woman at every well.

The issue that I began this post to deal with, the “trouble” of compartmentalized faith, comes to be seen in the aftermath of Jesus’ meeting with the original woman at the original well. When the hungry, tired, and still thirsty (it doesn’t seem to indicate that the Samaritan women ever gave Jesus a drink from the well) Savior was confronted by His disciples as they came with the sandwiches, He says something that we should pay attention to:

Meanwhile the disciples were urging him, saying, “Rabbi, eat.” But he said to them, “I have food to eat that you do not know about.” So the disciples said to one another, “Has anyone brought him something to eat?” Jesus said to them, “My food is to do the will of him who sent me and to accomplish his work.

I’ve never gotten the sense that Jesus made this statement in any way other than that of a man who has just polished off a perfectly cooked Fillet Mignon. How many of us have sensed the wonderful, awe-inspiring presence of God in church or among friends and then went and got a meal? This is fairly common. I wonder how satisfied we would have to be in the presence of God that we just said, “skip the meal, I’m good, I’ve had more 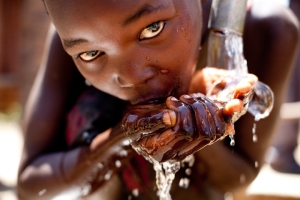 than enough for tonight.” This kind of satisfaction, the kind of fulfillment that has the ability to transcend the wants and problems that we face, is what Jesus experienced when He ministered to people. I wonder if we are experiencing that kind of joy. Interestingly, the woman wasn’t alone in this story, Jesus went to the well looking for something too, and He found her.

When we stop looking at all of the wells that dot our cultural landscape we stop asking why people keep showing up at them. And when we stop asking the questions we start missing the wonder and joy that comes from not only pointing someone to the well of living water, but drinking deeply with them. Conversion-based evangelism commands people to, “drink this water”. Community-based witness says, “I’ve been drinking this stuff all day, would like to try some?”

Friends, I would encourage you to look for the wells that are all around you. Look for the places that attempt to offer acceptance, love, pleasure, and friendship. They aren’t all bad, by no means, but they are all insufficient. Look for those places and sit down beside them, then keep your heart open, because there’s a woman at every well looking for a chance to call this her last and first time to draw water.