…we need a reluctant church…

Some Christians are skittish, particularly Christian leaders, when it comes to talking about politics and taking positions on political issues that are controversial. I understand this reluctance, and I actually respect the spirit behind it in some instances. However, Christianity does indeed deal with all aspects of life, including social matters; sometimes these things should be brought up. 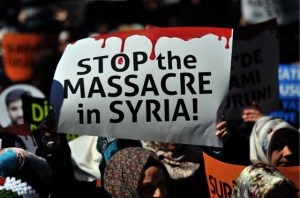 I haven’t read everything about the current discussions about Syria, and likely I won’t. When I call to the forefront political issues it is not as a politician, but as a Christian. In fact, what I believe to be true is this: I am a Christian, a citizen of God’s kingdom, before I am an American. If you don’t believe this is an important distinction I would encourage you to look at the church’s foolish advocacy of slavery (particularly in the 19th Century) and then tell me that it doesn’t matter which allegiance comes first. I am not suggesting that I have a political solution for the problems in Syria, but I do feel like the way we as Christians approach this matter is important.

Whether we go to war or not (whether you call it war or spin in as something else makes little difference to me – or history books) I will not suggest an answer. It would be easy for me to suggest that we should never cross our own borders to fight anyone. In America many states have a defense of habitation law, or a “castle doctrine” which basically says you are authorized to use whatever means necessary to protect your home as soon as someone crosses your threshold. If someone is in the street in front of your house screaming threats and brandishing weapons, you call the police. If they step up to your door you become the arbiter of justice, the Judge Dredd of your living room. It would be easy for me to say that this same rule should apply to our nation, but a couple of years ago I read the prologue to Elie Wiesel’s powerful book, “Night”, and much changed in my heart. The prologue is a transcript of Wiesel’s Nobel Peace Prize acceptance speech. In this incredible talk Wiesel says this,

And that is why I swore never to be silent whenever and wherever human beings endure suffering and humiliation. We must always take sides. Neutrality helps the oppressor, never the victim. Silence encourages the tormentor, never the tormented. Sometimes we must interfere. When human lives are endangered, when human dignity is in jeopardy, national borders and sensitivities become irrelevant. Wherever men or women are persecuted because of their race, religion, or political views, that place must – at that moment – become the center of the universe.

I cannot, after being cut to the soul by Wiesel’s words, merely throw a blanket of pacifism over every situation. I must allow for the possibility of circumstances that may demand action.

I cannot see the world with borders if I am to see people as more than a species. People are individuals. To see humans like melted Skittles, no longer unique but just another part of one big mess, is a pernicious agenda that, I fear, is adopted with the hope that it will soften the guilt of our greed and consumerism. Nations have borders, humanity does not. To define a person by the stripe of their flag is unfair (and before you object I would encourage conservatives to consider whether they want the world to see them as followers of Barak Obama, for liberals consider if you would want to be identified as citizens of Rush Limbaugh’s country – it’s not as simple as patriotism).

All of this leads me to the point that I wanted to make. The church can, I believe justifiably, support a government’s efforts to end oppression with military force. I understand that arguments can be made against that, and I don’t even know that I like saying it, but it seems to be sensible and Biblically supportable (I realize that I am leaving myself open to MLK’s non-violent resistance strategy, but international affairs come with nuances that I would have like to hear King’s opinion about). But, and this is critical, the church should never find themselves cheering for war. In fact, if there is one response that we as Christians should have, even to a “Just War”, is it tears. I have seen far too many Christians screaming things like “swift action”, and “kill ’em all”; if you look in the Bible the people making those kinds of statements were trying to ensure Jesus’ crucifixion.

We must be a reluctant church. Not so much reluctant to adopt political positions or speak out against injustice, but reluctant to rejoice when some other place “gets what’s coming to them”. Do not we as the redeemed children of God, above all others, remember that we have not “gotten what’s coming to us”? Aren’t we glad that God didn’t look at the armies of angels with swords flaming and use words like “swift action” and “kill ’em all”? Certainly we can look first with eyes of grace, and then, if necessary, weep as we do what we must.

Friends, our hearts should break as we see human suffering. Our first response should be prayer for people not hatred of people. And yes, I concede that sometimes compassion carries a gun, but it does so with a heavy heart.