While there has been much talk in our society for as long as I’ve been alive about weight-loss plans, diets, exercise programs, and the consequences of living without them, I heard something a couple of weeks ago that I think is a far more prevalent issue in our society than anyone’s BMI. I personally believe that there are more people who are willing to pull out their Total Gym or “Sweatin’ To the Oldies” VHS tape than are willing to make serious and constructive changes in another critical area. 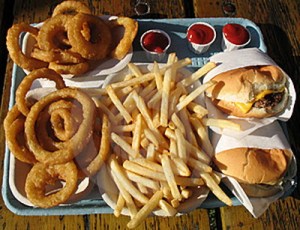 I heard an individual named JP Rangaswami give a TEDtalk on a topic that I could never have predicted either my initial interest or the amount of residual thought that it has generated.  Rangaswami begins his talk with the curious and provocative opening line:

“I love my food; and I love information.”

Rangaswami makes the interesting observation, through research, that humans are unique among the living creatures on earth in that our stomachs are far smaller in comparison to our body weight than any animal, and our brains are far larger in comparison to our weight than animals. There is, he suggests, a direct connection in why these things are true. In fact he says that based on the resources required, a species basically has to choose between mind and belly; or, if you want to have a larger brain you must have a smaller gut. Remember, this is not referring to someone who is overweight, but it is referring to our design. We, as humans, have relatively small stomachs in comparison to our brains for a reason…while he would not, I would suggest by a Creator’s design and purpose.

By this time he is really moving with the connections between food and information. He talks about the different methods of cultivation of the two and how there are unique similarities in hunters and farmers. He refers to preparation and points emerge like the difference between a steak and potato being separate parts of one meal, while pizza or casserole being mash-ups of many different things but also considered one meal. He talked about the differences in consumption with some people preferring to get raw ingredients, some wanting to get prepared ingredients but finished at home and still others wanting to be served a fully prepared meal. You can begin to see the connections clearly here if you give it a second of comparative thought.

The first time I hear this talk there was a quote that Rangaswami gave that really drew me into what he was saying, and that is what I want to offer today:

There is no such animal as information overload, there is only filter failure.

He makes the point that we never say that our world has “too much food”. The issue of overeating is not a problem with the amount of resources that we have, but with the consumption of those resources.

Information, if viewed from the point of view of food, is never a production issue. … It’s a consumption issue, and we have to start thinking about how we create diets [and] exercise.”

The brilliance of what he is suggesting here is that maybe we were created in such a way as to need certain kinds of information more than others, not to survive, but to be healthy. I think that there is far more mental obesity in America than physical. I believe that there are far more people whose information diet consists of a majority of informational junk food. Those haunting admonitions by our mothers to “eat your vegetables” is not just about the serving plates in front of us, but about the books we read (or are not reading), the television shows and movies we watch, the way that we are spending our auditory time (music, talkradio, audiobooks, even silence, etc…), and the kinds of conversations that we are having (or the meals that we are sharing) with each other.

I would challenge you to begin to look at your own consumption of information, from every stream (television, radio, internet, print, etc…), and consider just how healthy your diet is. And as a Christian I am compelled to say that there is a daily staple of any healthy diet, and that is the Scripture; don’t forsake the one thing you need most or you absolutely will find your strength to be withered.

The link to watch the entire talk is  here – JP Rangaswami: “Information is Food”  – and it is only 8 minutes long, so for a small investment you can engage the actual source.