…how we come to believe what we believe – pt 4…

The Wesleyan Quadrilateral remains our guide for this line of thought. 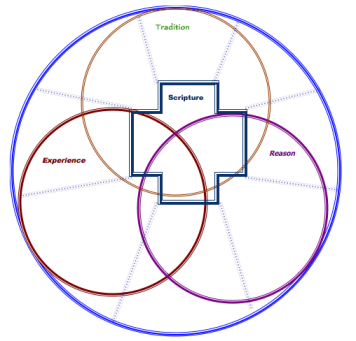 Those things that are passed down from one generation to the next, called Traditions, make up the next component in Wesley’s system of theological discovery. Though it is easy to get caught up in the modern church frenzy of styles and preferences when the word “Tradition” is mentioned, this is not primarily Wesley’s idea here. To look critically at the idea of traditions we see that, to a degree, this is how we learn anything at all. Without the writings of those before us, the experiences of those who teach us, and the stories of those who raise us we would know very little. No generation starts fresh trying to rediscover everything, they stand on the shoulders of countless ancestors before them. Traditions in the church, and in the Christian faith, according to John Wesley help us to not move away from our “first Love”, or from the paths that have sustained men and women in that pursuit for centuries. The sacraments alone are compelling evidence that traditions are not bad or evil. We see the Scriptures through the eyes of our forefathers when we take Traditions into account.

Tradition is, in the way of building an initial theological idea, the most valuable of the three Quadrilateral elements after the Scriptures. The creeds, systematic theologies, and doctrinal statements of denominations, along with the wise words of “old timers”, do not completely define truth but give a starting point for that exploration. My personality being bent toward study and proof and a “seeing is believing” mentality, I find the work of those who have gone before me, and passed down their wisdom to me, to be a vital part of my process of understanding. Tradition, and traditions, should be questioned but not badgered. Though the obvious Scriptural traditions (sacraments) are spelled out in a way that defies argument or disbelief – with regard to their importance and practice – the pure “traditions of men” are, to me, moveable reference points that help each generation make sense of worship, belief, community, etc… The way my fathers, grandfathers, and spiritual ancestors did things, interpreted the Bible, and made sense of the world around them may not always translate into my cultural moment, but I would be a fool not to look closely at both what they said and how they arrived at those conclusions. I heard a preacher say one time that it would be a fool’s pain to “bleed” over issues that have already been “bled over” by those before us. Traditions, with regard to my theological approach, are things that should be accepted for previous generations and examined for current ones; there is no sense in re-inventing what works, or in starting from scratch when only one ingredient needs to be altered.

With all of that being said I must admit that I am a bit schizophrenic with regard to this area. I am, in some ways, a very forward thinker. In my very traditional denomination, if all of my viewpoints were systematically laid out before the world, I would be considered quite liberal. However in many other movements I am a solid conservative. I proudly straddle the line between past and future. I know, from experience and observation, that there is a real arrogance that comes with youth. But to be fair there is an equal arrogance that come from age/experience. Neither are healthy. In a way that neither the “we’ve-always-done-it-this-way’s” nor the “let’s-change-everything-now’s” wants to see, the essential model for the church is “both/and”, not “either/or”. We need humility on both ends of the spectrum stemming from the understanding that there is room to grow both ways. Jesus, interestingly, created a tension as He implicitly offered His definition of spiritual maturity. He said that the more mature you become the more like a child you will look.

Too much sweat, blood, tears, time, and effort has been passed on to us by those that went before for us to write it off and start everything over again. While I understand that each generation wants to talk of revolution, which I am fine with, I think that a simple rule should govern that talk. Any revolution that we should want to stir up should be one that would not dishonor or discard our ancestors, but it should be an uprising that they would have started had they lived to see this moment themselves. In doing that we utilize the tool of Tradition (and Traditions) to help accurately shape our theology.