…the Gospel according to Uncle Chu…

I used to think that I was the only Christian that ever did anything foolish. I was under the impression that believers worldwide had mastered the art of living sacred and sanctified in both wake and sleep while I, on the other hand, spent a good bit of my time just trying to remember if I had confessed every individual sin I might have committed in the last 30 seconds. As I have built more transparent relationships I realize now that we all face daily pressures and even the most holy of us succumbs at times to impulsive behavior that we know isn’t healthy or right.

Moments are dangerous things, if for no other reason because they have a tendency to feel all encompassing. Harsh words spoken in haste are a direct result of a temporary belief that there is nothing beyond “that” moment, and the pressure of “that” moment is demanding release…so, always more often than we wish, we tend to “crack the valve” and bow to the moment. All of this means that we are forsaking the idea of future hopes and destiny and promise; all of these are things that God talks much about in the Scriptures.

I say all of that because of something that happened this morning. I was sitting in the kitchen reading and drinking coffee, not feeling like I was on God’s “good list” (as my tendency is to turn Him into cosmic Santa when I slip into my own legalistic tendencies). And as I was waddling through this mire I saw this: 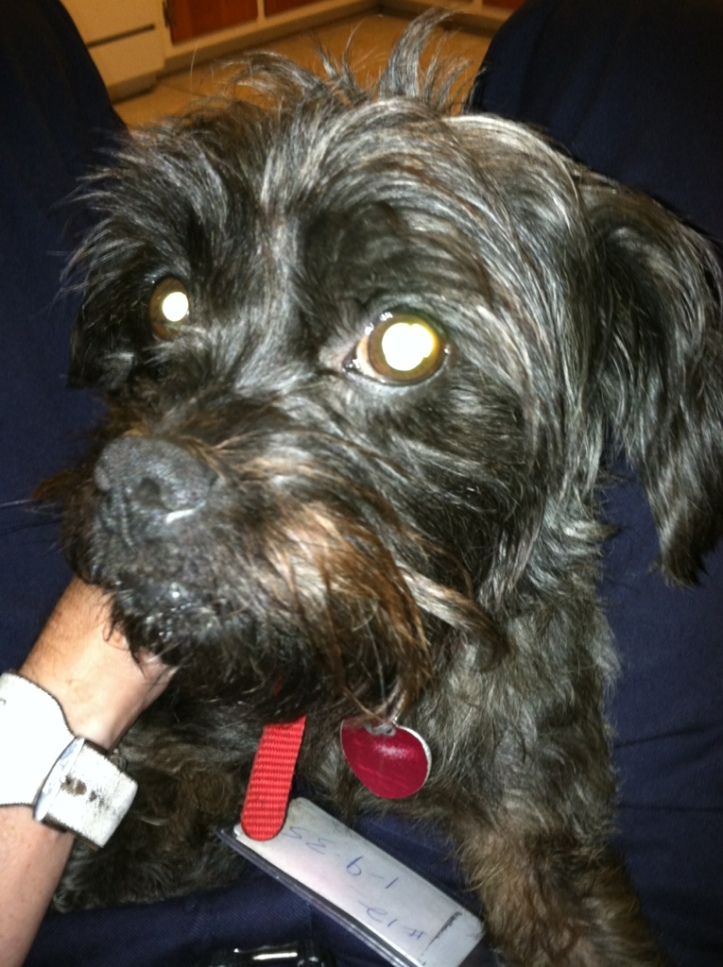 If you don’t already know him, this is Uncle Chu. Uncle is part Brussels Griffon and part Toy Poodle, a very cute dog and a very loving animal in general, but, to be perfectly honest, not the brightest canine I’ve ever run across. As I was reading it was this face, cute and dark and dumb, that jumped onto the foot rest and then squeezed between my legs and my reader so he could command my full attention.

A couple of things I will say that are pertinent: Uncle Chu had already been scolded for snarling at our other dog, Phalkor, while they were eating. Also, Uncle is about a week overdue for a wash and wax, so he is sauntering around with a fairly powerful musk, and one that tends to cling to your hands when you pet him.

Despite the fact that I had already scolded Uncle, and I had already blocked his pathway to my lap once, he was unfazed by these feeble human gestures of displeasure. He would not be satisfied until he was in position, muzzle to nose. What Uncle Chu understands about the Gospel, that I have a hard time with, is the goodness of his master. I don’t say that arrogantly, I say that from the dog’s perspective. Chu knows that 100% of the time, if he can get in my face and look at me with those big dumb eyes, regardless of what he has done in the last 5 minutes I will pet him and scratch behind his ears and show him affection. Chu is playing the odds every time he slinks over to me when I’ve scolded him, nuzzles my hand, and looks for affection from the same source correction came from. He does this because he’s never known any other response to his drawing near to me.

So as he pushed closer and closer to me, even as I was already petting him, I heard my heart echo the simplest and most profound truth. There is never a time when I, as an adopted son of God, cannot step into God’s presence seeking His love, mercy, and grace and fail to find it. Even if I’ve been foolish and had to be corrected. Even if I come slightly smelly. God welcomes us in EVERY TIME. His goodness is matchless, His mercies are eternal, His love is total, and His grace…His grace, Paul said, finds the very depths of our failure, the darkest places we have hidden from the world outside becasue of our shame, and God’s grace digs a tunnel under those caverns and goes farther than sin and failure can ever go. Paul’s words are beautiful:

“but where sin increased, grace abounded all the more,”
– Romans 5:20

Friends, today I offer this hope, that if we will but seek His face He, being a good Father, will grant us His affection. Uncle Chu understands, I challenge you to try for yourself today.