…where you end up…

Our days have the potential to take us to places we could never have anticipated. And that potential is increasing, not decreasing as we move into the future. With the frenetic pace of information and digital creation, most days we find ourselves to be unassuming Dorothy’s: furiously peddling on our bicycles, with a destination in mind, but frequently caught up in quickly changing conditions resulting in unpredictable tornados of tragedy, confusion, need, desire, expectation and urgency. 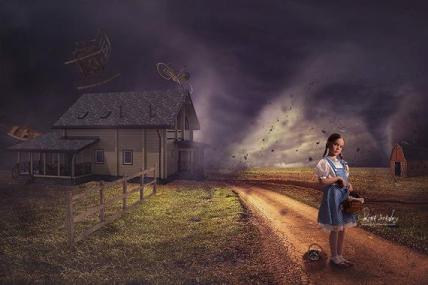 Where we land, once the winds have harshly pushed us out of our comforts, can feel like another, completely unfamiliar world. I believe that we can experience the disorientation of Oz far more easily in 2020 than we could in 1950. People are still people, but innovation and technology has created an atmosphere that is better described as the “American Disorder” instead of the “American Dream.” This is not to say that difficulty is a modern condition, only to say that in this hyper-connected world we find ourselves carrying everyone’s difficulties, not merely our own.

Enter the unique wisdom of the Gospel of Matthew.

In Matthew 14 the story is told of the tragic and senseless death of John the Baptist. John had been imprisoned after publicly barking about Herod’s inappropriate relationship with his brother’s wife. Those in power have always hated to have authentic, prophetic voices openly call out their vices. Pharaoh, Saul, Caesar, Herod, etc… What’s old is perpetually new.

So, languishing in a prison cell, John had already sent some of his followers to Jesus to ask if He was actually the one that John was telling everyone would show up (Matthew 11). This is a reasonable question coming from a man who believed he’d done everything God told him to do and yet still ended up in the clink.

Jesus was clear, yes all is well, good news has actually come. And Jesus essentially said to John and anyone in earshot, “if you can accept that your life might still be tough even though Messiah has come, then there’s a special kind of reward for you.” And, presumably after his friends brought this message back to the Baptizer, John goes quiet. That is not to say that he sulks or get upset, but to suggest that John chooses to fully own the words of Jesus. So he chooses to patiently walk out this prison pathway. Certainly in those dark times John would have adopted Joseph as his patron saint: a slave who ended up running the jail in which he was incarcerated and was eventually rewarded for his incredible faithfulness with a miraculous promotion.

But Matthew 14 does not tell us a story of a new Joseph who took an unlikely path from prisoner to prince. No. Matthew 14 actually tells us the icky and lurid story of an incestuous encounter between a king and his niece, the results of which would not liberate John from jail but instead would separate his head from his shoulders and his mortal life from this world.

In the wake of this tragedy, the same friends and followers of John who’d run messages back-and-forth between the Baptizer and the Lord Jesus, gathered the body of their leader and mentor and respectfully delivered it to his family. It’s hard to imagine old Elizabeth and Zechariah still alive more than 30 years after they were already too old to have a child. But brothers, sisters, cousins and neighbors would have received the body for anointing and burial.

Taking care of John’s body was the right thing to do. It was appropriate and honorable, and these men (and perhaps women?) needed to see things to their end. But after following John for so long, after sensing the rich power of the God of their fathers in the cleansing waters of the Jordan, and after calling out the religious elitists of their day, and then after the confusion of seeing their prophetic ministry become a prison ministry – after all of this the most unexpected outcome had come out. They were left in the wake of the tornado of tragedy; with no leader, no direction, and probably no small amount of fear considering how wantonly the current administration had introduced John to the blade. Their stability, their “Kansas-homestead,” had been picked up by the confusing and, often evil, work of a broken world and they’d landed in an unfamiliar and alarming place.

Isn’t it interesting though how the struggles of life can bring us clarity.

Dorothy, after landing in Oz, was by no means in control of the situation. She was out of her depth, and had it not been for the voices of the locals she and Toto could have been paralyzed with decision overload.

But in a world where so much can, and has already, gone wrong, and where there are so many choices that all seem viable and potentially legitimate, we find out that there is one thing that can consistently breathe peace into that maelstrom of chaos: HOME.

Dorothy’s one redeeming quality was not how she’d arrived, or that she’d accidentally landed on a tyrannical witch, and it wasn’t even that she’d gathered a traveling team (really she’d convinced them all to go with her based on hollow promises that she really had no way to make good…she turned into a politician when she offered that scarecrow a brain without having a brain to give him). No, Dorothy’s primary strength was not what she’d done or what she’d promised, it was that her compass was always pointing her in the right direction. Home.

Why was she consumed with this? Well, obviously, because there’s no place like home.

John’s disciples, after having done everything they knew to do, proved that their mentor had done a good job training them after all. We see this in verse 12:

And [John’s] disciples came and took the body and buried it, and they went and told Jesus.

Where do you go when life beats you to death? Home. You go home.

Where do you run when there are million decisions and none of them seem clear? Home. You go home.

Where does your internal compass point you when you have landed in Oz and you have no idea what to do? It should be pointing you home.

And Jesus is home.

Home is not another land where there are mansions being decorated, not an ethereal space in another dimension of existence, and not even a beautiful throne room where the flap of wings and the cries of “holy” echo throughout the chamber.

None of those places are home. Jesus is home.

John’s disciples had nowhere else to go, so they went to Jesus.

Where are you today? No matter where that is can I offer you directions? Go home. Go to Him who loves you with an everlasting love and find rest and healing in His arms. Click your heels and, as a statement of faith, say to the confusion of this present world, “there’s no place like Home.”